Back in the early 1990s the girls uniform at Wesley College looked a lot like it does today. A sea of purple. Purple blazer with yellow trim, purple jumper, purple tie, and a purple and grey skirt, paired with either grey tights or white knee socks, and t-bar school shoes. 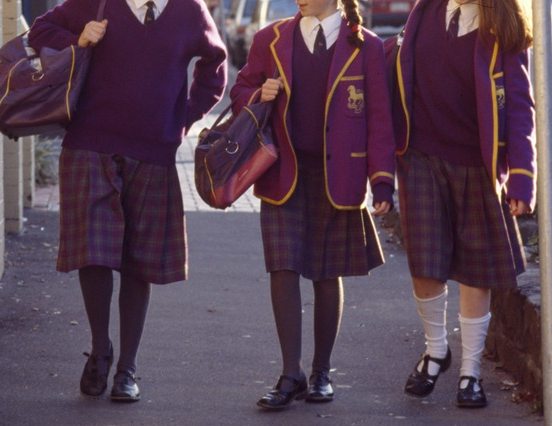 In 1996 this uniform was replaced by a new look created by Prue Acton, which was then replaced in 2014 by the current uniform designed by Jonathan Ward.

In 2014 Melbourne’s Wesley College introduced a new school uniform. It retains their iconic purple colours, but with a fresh new look. 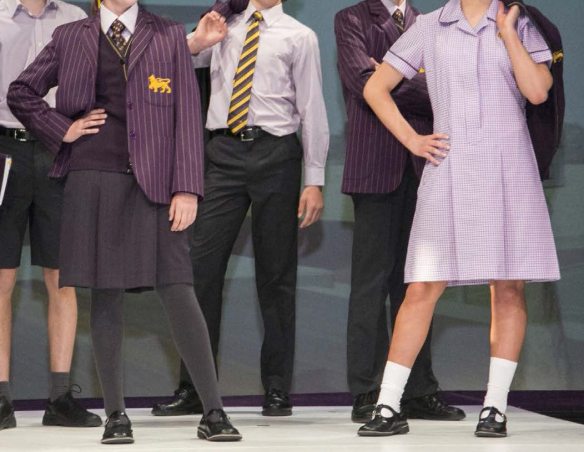 Wesley celebrates… with a new uniform

The lead up to and now commencement of our sesquicentenary year of reflection and celebration about being 150 years young, also marks the release of a new school uniform.

The College initiated consideration of all that we love about our current uniform, sought out where we shared some reservations and engaged pre-eminent industry design and technical capability through The Jonathan Ward Collective (Jonathan Ward – Design, Noone Imagewear – academic uniform and Champion Teamwear – sport/performance uniform) to consider ideas for a classic and contemporary new school uniform.

The release of the new uniform in late 2015 to new students and existing students from early 2016 has been received with great enthusiasm and a sense of purple and gold familiarity, as it is a design and style that embodies the Wesley College about which we are so passionate. The comments and feedback through the Uniform Shops has been overwhelmingly positive.

One cannot help but reflect on the boldness of Prue Acton some 20 years ago, in designing a new uniform for Wesley College which acknowledged over a hundred years of a boys-only school history and fused bold ambitions to the early days of Wesley coeducation. It’s amusing to note that our existing uniform was greeted with an observation…it’s bright isn’t it. And now, our new uniform in 2016 has moved to a deeper and royal shade of purple and, of course, the inevitable observation, it’s a bit darker isn’t it!

Fashion can be an evolving cycle of classic and contemporary, rife with clichés trying to explain the aesthetic, seeking to give voice and symbolism to how we wish to present our College. The move to a deeper, richer purple, the return of classic grey to complement and highlight a more tailored cut for both the male and female body shape. A lightness and layering of our summer collection (Oh – we are in full swing now!) to respond to the heat of the Australian summer and provide our Early Childhood Learning Centres and Junior Schools with younger styles that remain true to the new Wesley College uniform.

As far as introducing a new uniform to a College with such a significant history, I think we can say that all has gone well, so far. Further releases of differing elements of the academic and sport uniforms will take place as we move through the school terms and seasons, with many existing families taking advantage of the 2016/2017 transition timeframe, as well as continued sale of the existing uniform through the Second Hand Uniform Shops.

The design concepts of the new uniform aim to connect students with the traditions and history of Wesley whilst, at the same time, reflecting a modern, innovative, progressive school in contemporary 21st century Australia.

The current Wesley College uniform introduced in 1996 was designed more than 18 years ago by Prue Acton and, since then, only revisions to the cut and design of items have been made and more modern yarns and fabrics used. In considering our current academic and sport/performance uniform and potential scope for a new uniform, the College surveyed in excess of 1,800 members of our community between March and May 2013 including current and past students, parents and staff.

Respondents were given the opportunity to provide additional comments on the design and quality of both academic and sport/performance uniforms, what they like and dislike about the existing uniforms, what changes or additional items they would like to see and about the First Teams uniforms.

The full list of responses extended to over 400 pages of comments, with well over 1000 individual comments made in some areas.

In summary there was somewhat equal measure between overall satisfaction coupled to a desire for a number of specific improvement opportunities and an interest in exploring a new contemporary design.

During June/July 2013 the College released an Expression of Interest and Design Brief for a new Wesley College Uniform and subsequently appointed acclaimed Australian designer and Executive Designer for RM Williams, Jonathan Ward, of the Jonathan Ward Collective including Noone Imagewear (academic uniform) and Champion Teamwear (sport/performance uniform).

Why is the school introducing a new uniform?

The current Wesley College uniform, designed by Prue Acton is approaching two decades of age with the benefit of select minor enhancements over the years, particularly as regards the introduction of new yarns / materials.

Two decades on, Wesley is well due to revisit the question of what meets the contemporary requirements of the College and its students into the 21st century.

What are the major differences between the current uniform and the proposed new design?

The most defining point of difference with the new uniform is our choice of a deeper and richer purple (darker aubergine hue) and gold both enhanced by a more tailored elegant and classic design style for both girls and boys including the introduction of a fine pinstripe feature in the blazer, shirts, girls dress and skirt. Also reintroduced from our College uniform history is a darker charcoal for both boy’s shorts and pants and girl’s pants and skirts.

What is the timeline for introduction?

With notice of uniform change in late 2014 and availability of the new uniform for purchase from late 2015 for the 2016 year existing families are encouraged to balance uniform needs knowing the timing of the new uniform release in September/October 2015.

2) ALL new students at ALL year levels commencing with Wesley in 2016 must purchase the new uniform;

3) Existing students at Wesley prior to 2016 will change over to the new uniform during the 2016 and 2017 years (noting exceptions detailed below);

4) All students will need to be in the full new uniform from the start of the 2018 year.